‘There’s Something About Visiting The SCOAN That Brings Success’ 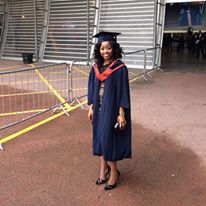 A visit to the Synagogue, Church Of All Nations (SCOAN) turns things around, as one young lady from Windhoek, Namibia, found out. Recognising the grace of God in the life of Prophet T. B. Joshua, she logged in with her faith and harvested multiple blessings.

Twenty-seven-year-old Paulina Shifeta had been admitted to pursue a Master’s degree in International Accounting and Finance at the University of East London. The programme was to commence January 2014. Her joy, however, soon came face to face with a sad reality. She needed £11,400 for tuition fees, a sum her family could not afford. Several applications for a scholarship were unsuccessful. She considered one last chance: apply for a partial scholarship from the government of Namibia. She approached the office in charge. “We don’t fund studies outside the Southern African Development Community (SADC),” she was told.

It was time to put her faith into action. Paulina filled the application form but didn’t submit it. She decided to visit the SCOAN December 2013 where the Man of God, Prophet T. B. Joshua prayed for her. What followed was a miracle.

“When I returned to Namibia, I submitted the form just a few days to the deadline. In January, I called the office, to find out if my request was successful. The lady on the phone answered, ‘We are not allowed to give out the results yet. But yes, you got the scholarship’. I asked how much I was awarded and she replied, ‘the maximum amount’. The sum was enough to cover my entire tuition! Again, the week after that, I went to the office and saw that I was the only one who was sponsored to study outside the SADC!”

Paulina, however, did not begin her study in January, as her visa had not been processed. She wrote to the university and requested that the offer of admission be deferred until September 2014. When eventually she began, she met challenges. “At some point,” she said, “I wanted to quit. I thought I would never make it.” It was time again to visit the SCOAN.

In April 2015, before her final exams, Paulina made the journey. “The Prophet laid his hands upon me and prayed for me,” she said. “I returned to London and wrote the examinations a couple of weeks after. When the results came out, I graduated with a distinction!”

Also, during her first visit to the SCOAN, Paulina suffered from a terrible heartburn that wouldn’t go away. She was also plagued by a chronic headache. “I wrote out these medical conditions on my request slip, asking to be prayed for by the Man of God. I am happy to say that two and a half years on, I have not felt any of the symptoms!”

Paulina adds: “I am truly grateful and I believe our generation is the most favoured to have prophets, such as T. B. Joshua, in our midst. I cannot imagine living my life any other way. Everything I desire, I believe I can receive, if I ask with unwavering faith.”