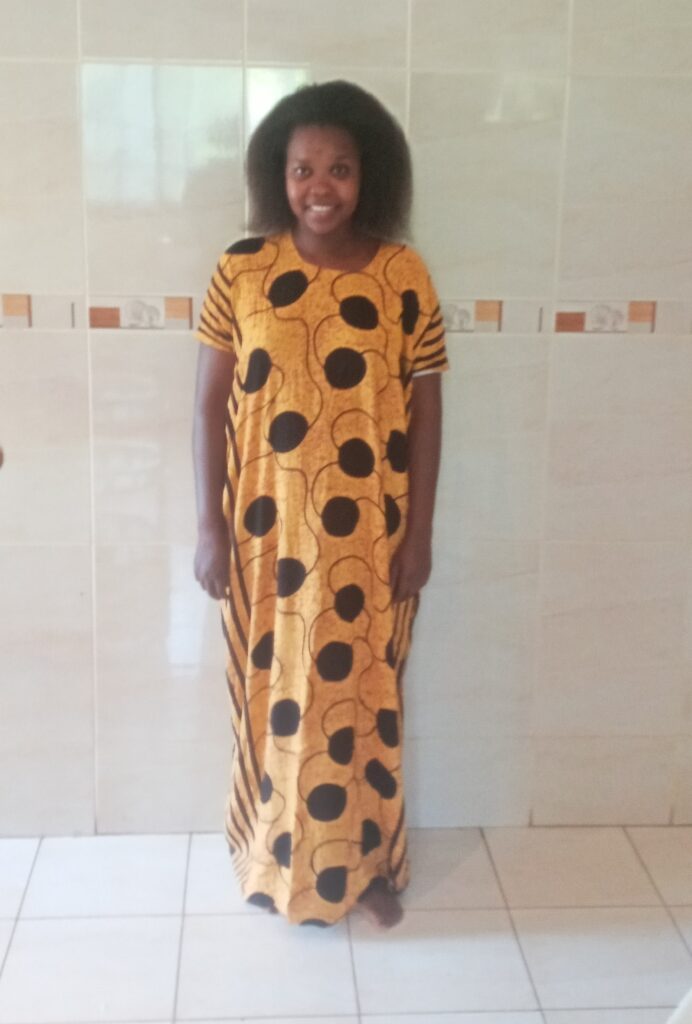 The nurse whispered into my ears; “Good morning, Lena, the God of Prophet T.B. Joshua said, Good Morning and He loves you.”

Those were the whisper and words that brought me back to consciousness.

I had fallen down from the fourth floor of the apartment I stayed in Malta and had been rushed to the hospital where I was wheeled straight into the ICU of Mater Dei Hospital.

The nurse on my bedside had been on the phone with my father, who after their conversation had instructed her to whisper those words into my ears.

WHAT THE DOCTOR SAID

Tired, weak and confused, I realized for the first time that I was in the hospital and, what and how I got there was unknown to me. I had gone numb in my legs, my forehead and two front teeth were disfigured.

The doctors said I had fallen down from the fourth floor apartment of where I stayed and that both of my legs were broken. The only choice presented to them at that moment was to insert intramedullary nail on both of my legs and on my right hip.

On 19 January 2018, my parents and sister paid me a visit to be with me through the hardest situation I have ever faced in my life. I still wondered how I got here, why that fall and how it happened. But I would not see my family until I was moved from the ICU to the Orthopedic Section Ward 3. Finally, I saw my family and I was filled up with so much joy.

“Be of good courage,” My father would say to me. “God will heal you, mold your heart afresh and change your will according to HIS will.” I believed every word my father said. He did not stop there with his words of encouragement; he would make sure he always played me a prayer clip of Prophet T. B. Joshua saved on his phone, which he would place in my heart area whenever they visited. As soon as the clip stopped to play, there was always that surge of peace within and outside of me.

I HEARD THE VOICE

On a particular night, as I slept, I heard this beautiful, calm voice, full of authority in my heart said, “Get up and walk.” Instantly, I woke up and I did as I was told by the voice.

As I began to move my legs, a nurse whom I did not know was on the watch near my bedside stopped me. “You can’t walk; you have broken both of your legs.” The nurse said nursingly to me.

But I was not ready to accept what the nurse said, I can walk, I told myself with the assurance of that voice previously.

THE BELIEVER AND NON-BELIEVER

If I had fallen and my two legs almost lost and a voice suddenly told me to ‘get up and walk’, it simply means only one thing, that it must be the voice from the Light and it wants the good for me, so, it was time I put my faith and belief into practice. Get up and walk, I shall, I would not stop reminding myself. I was grateful to the Almighty God that it kept my mind alive.

All sorts of tests were carried out on me. One was when I was asked how many fingers and toes I had to test my mental and psychological state of mind. Ten each, of course, I replied to the astonishment of the physiotherapist who found it hard to believe that I had regained movement on my toes.

I never stopped the attempt to get up and try to walk, but every time I did, the nurse on duty tied the braces on my legs tighter. It was difficult convincing the nurse with my actions of trying to get up and walk that belief and faith are not dormant; if the voice said ‘get up and walk’, it is left for the hearer to swing into action, and I was ready to swing into action, to put my faith and belief into practice.

TO BE WITH NATURE

The injections the nurse gave me every morning in my stomach to prevent blood clot were countless and painful. While the doctors tried to teach me how to use a wheelchair, little were they aware that I had something else off my sleeve; I was tired of the hospital environment, I wanted to breathe the fresh air of nature, to see flowers of multiple colors, the sky, the sun; I wanted to be a part of the raw earth away from the hospital and its routines and medications.

How would these doctors and nurses know that that whisper had healed me? I thought. I was nevertheless grateful to them that, while I was certain that I have been spiritually healed from the inside, they had to do their job to get me physically well.

If there was any reason I wanted to ride in the wheelchair it was to enjoy nature and I finally got my wish.

First, it was surgery on my left eye and to bring out my forehead. My family refused because they believed that Jesus Christ has already done the spiritual surgery on me.

The second attempt was on my foot; every morning the doctors tried to persuade me to go for foot surgery to construct a bone that was sticking out of my left foot else I would never walk again. I refused. I remember that whisper and those words: “Good morning, Lena, the God of Prophet T.B. Joshua said, Good Morning and He loves you.”

If He loves me, He would not allow me to suffer, so I am not suffering in this but God trying to tell me something. I would tell myself. I wondered, often still why I had to fall down from that fourth floor, I did not die and here I am. I believed the Lord has already healed me.

DISCHARGED FROM THE HOSPITAL

On 23 February 2018, I was discharged from the hospital. I was happy. My family brought me to my new home, switched on Emmanuel TV and everything felt complete. The Lord would always remind me that I am not going through this challenge alone, He is there watching I need only to Trust Him.

At home, it seemed I had to learn and relearn everything again, I had lost a lot of weight that had to be regained, I had to learn how to get up and walk; massages had to be done on me to prevent any form of clotting…

One day my father said to me; “Lena, don’t you think it is time we practiced standing up?” My father never said, ‘you’ instead, it was always, ‘we’, his way of saying, we are in this together and we are going to pull this through together.

At first, I told myself it was impossible to stand up and walk, I was beginning to be used to the couch, but that same calm, loving voice again: “I will teach you.”

The Messenger of the Light, T.B. Joshua would always say: “You need the Lord’s help to stand, to walk, to smile, to laugh.” I knew I could not stand and walk by my own efforts without God’s help. I thanked the Lord in my heart and I stood up. My first step was a wobble; I felt like a baby learning how to walk again, then, I felt a shock like an electric current coming from my father’s right hand to my right hand as he touched me and I began to walk!

As a Christian I was confused, I asked why me, I complained, I began comparing myself to others, I was sad because every time I smiled, I was mocked for my teeth and stared at on crutches.

THE WORDS OF T.B. JOSHUA STARE AT ME

In my confusion, comparison with others and beginning to have low esteem of myself, His words came through to the rescue: “God can use any foolish thing to preserve you, it can be sickness, and it can be poverty.” With this, I felt relief and was prepared to fight on with every help from God Almighty.

BACK TO THE HOSPITAL

Prior, the doctors had cut my stomach open to check whether my organs were all right, the Lord was gracious enough to protect all my organs. With 30 stitches in my stomach, I had to lay flat on my back the entire time I was in the hospital.
I went back to the hospital for a final check-up to see whether I was all right enough to fly back to Kenya.

With my family, I went for scan for my legs and when the doctor looked at the scanned images, they asked in surprise; “What are you doing in a wheelchair?” There and then, I asked the Lord to help me to get up; I took my crutches and began to walk. The doctor was amazed and encouraged me to continue exercising my legs by swimming. The beginning of my miracles.

BACK TO KENYA, BACK TO STUDIES AND THE DEVIL’S LIES

The devil tried to stop me several times-I had bad dreams, mockeries and reminders of my past, but the Lord helped me to remain focused. I held steadfast to the words of the Messenger of the Light, T. B. Joshua, that; “Christian faith must be tested so that you can spiritually grow.”

MY WISH TO VISIT SCOAN

Having watched every of the goings-on- and still watching- on Emmanuel Television, my greatest desire was to be there physically, but it was not to be. I could not make it, instead, my mother went, which I realized did not make any difference, because there has never been a barrier between the recipient and the dispenser.

DISTANCE IS NOT A BARRIER

While my mother was in Lagos, Nigeria, I was in Kenya, and the signs and wonders of the Lord were taking place in my life!

I had just finished supper and I felt a gentle seemingly electric current go through my entire body, from my head, heart, hands, stomach, legs, and my backside as if my body was being electrocuted.