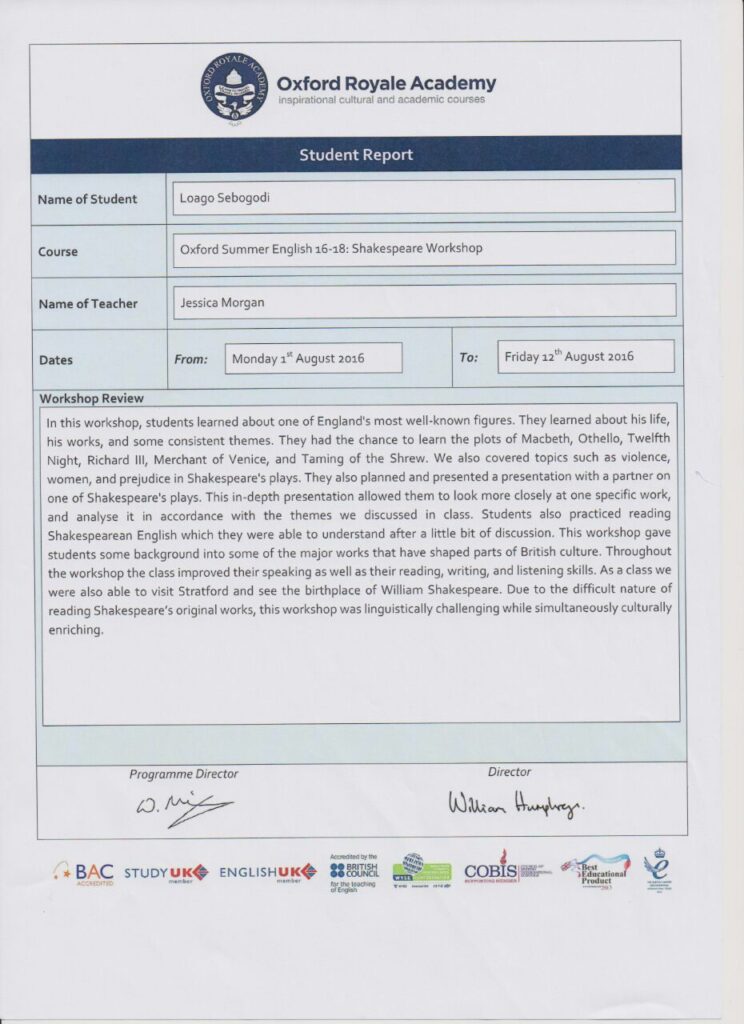 ”The year 2016 was wonderful!” began Loago Brandon Sebogodi. It started with a visit to the Synagogue, Church Of All Nations (SCOAN) where he offered prayers and was blessed with spiritual items – ”tools” he packed with him everywhere he went. What were these? And what difference did they make? Find inspiration, as you hear the eighteen-year-old testify to God’s special favour in his life and academics:

”My mother and I visited The SCOAN on January 14, 2016. We had the opportunity to be in the presence of God for a whole week where we offered prayer for ourselves and our family. We were put in the prayer line, alongside visitors from all over the world. I received a holy touch from the Man of God, Prophet T. B. Joshua, the Faith Bracelet and Believer’s Card. A day before leaving for Botswana, I also received the Morning Water, Stickers and Mirror – spiritual tools to build my relationship with God.

My AS results had come out a day before we traveled to Nigeria. I had two “A” and two “B” grades. These were good but I had no intention to go ahead and do a second year, which was A-Levels; my mother said she didn’t have enough funds to pay school fees, about P55, 000, excluding accommodation and feeding. Days later, however, I told her that I would continue with my A-Levels, though school had already commenced for two weeks. She had to plead with the authorities to accept me. She also negotiated payments with them. Surprisingly, they agreed to her request without further questions and she was given time to source funds for the fees. I was also voted prefect by teachers and pupils the same week I returned to school.

Two weeks later, I found it difficult to adjust; I was far behind on the syllabus and had to catch up. I did not do well in the first test. I had weak results. My teachers were worried; they encouraged me not to give up. I kept praying with my Believer’s Card, and ministering the Morning Water every day as I left for school. I also packed the Morning Stickers wherever I went. God, who is forever faithful to those who seek Him diligently, intervened. My grades began to pick up. By the end of the term, I received the first prize in Accounting!

The second term was much shorter but quite important. We had to write mock examinations, crucial for those who wanted to apply to universities immediately and gain provisional acceptance. A few weeks before the commencement (July), my school Principal gave me a letter from Oxford Royale Academy. It was an invitation to Summer School (July 31 to August 13, 2016) on a scholarship of ‎£3895.00. There were selection criteria and I doubted whether I could qualify. I was also worried that my mother would not be able to get the money required, because parents had to help out with travel arrangements to and from the United Kingdom. I showed the letter to my mom and was surprised when she said: “This is God at work!” She described it as a great privilege, saying He would provide all that was needed. Her words gave me courage and hope, and lifted my faith to a new level.

I applied for the programme, praying with my Faith Bracelet and saying: ”Lord Jesus, take more of me and give me more of You!” When I was through, I forwarded the form and prayed. Two weeks later, I received an email from Oxford Royale Academy. It said my application was successful; I had been registered for a full scholarship English Course and had to be in the U.K. July 31, 2016. My mom worked round the clock for my flight booking. I finished my examinations on Friday, July 28, 2016. It was a stressful time. But I endured, knowing God was behind it all.

Experiencing life outside Africa was a dream come true; I had always wanted to travel abroad. I took my Morning Water and Stickers to Oxford and used them whenever I went to class. At the end of the two weeks, I graduated successfully. I even got a prize for being among the best three students in my course. Upon returning home, I also received my examination results where I scored two “A” grades and one “B” grade.

By September, the third term had started. I had to prepare for my final examinations. This is a time when students who had performed exceptionally throughout the year get rewards. By the grace of God, I was among those who took home awards in Accounting and Business Studies at the school’s prize-giving ceremony. By October 17, 2016, the examinations had commenced. I kept believing that the God of Prophet T. B. Joshua who saw me through the hard times of 2016 would do more in the new year.

Thank you for your unending support and prayers to all of us, viewers, around the world. Emmanuel!”