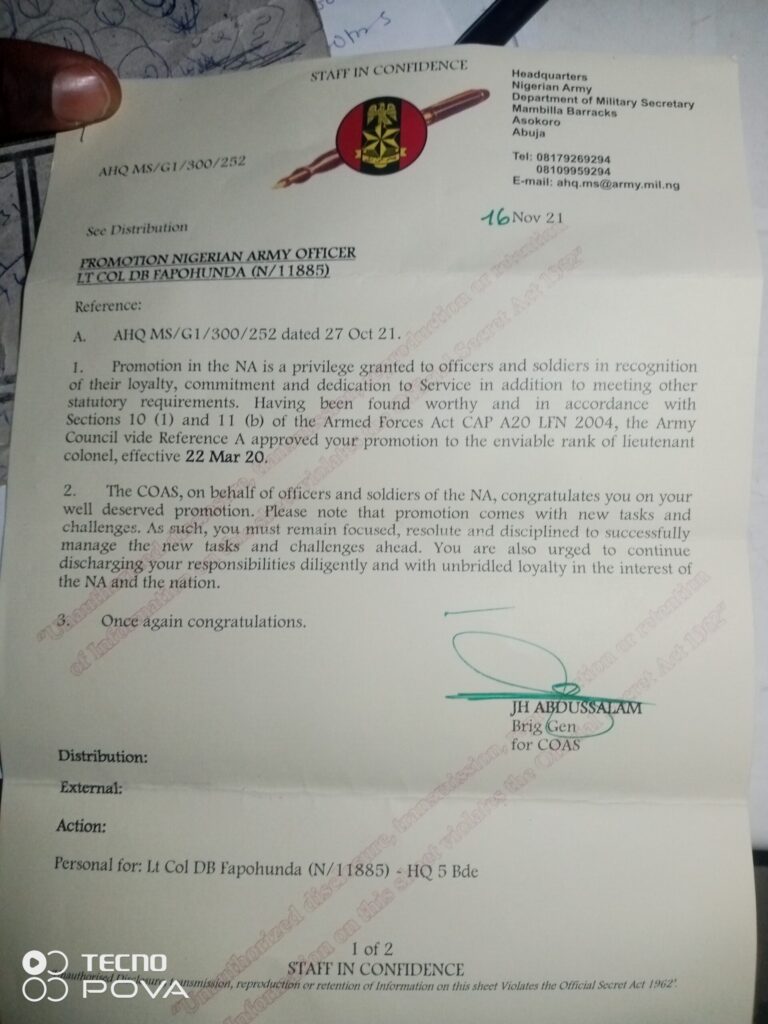 2014 was harrowing for me in every way. I lost my job after two failed attempts at writing promotion exams, and the third counted against me, which was necessitated by an internal government policy, which to this day I could not come to terms with.

In 2016, forty-two officers were recalled to rewrite the last attempt paper, and seventeen officers were successful in the exams.

Despite my successes at the exams, I was forced into retirement. Two years into a forced retirement from the service, everything was at a standstill, stagnant; my family and I faced serious challenges, e.g., unable to pay the fees of my children, feeding was very difficult, I sold two of my cars, sold some of my landed property, loss of my lovely mother, and I was seriously sick, among other challenges.

I visited different churches for prayers but no solutions came forth; all I got from those churches were assurances and messages of hope and expectations that continued to be derailed.

It was during my trying period that my father and mother in-law introduced me to Emmanuel TV.

I have heard so much about the Prophet in the Synagogue and all the good things he was doing but never gave it a thought to visit the place, perhaps because of the many negative tales that my mind had been fed with, but this time, with my overwhelming problems and the fact that both my father and mother-in-law had introduced him to me through the TV channel I decided to give it a try with all the doubts in the world if anything good would come out of it since all else had failed.

I watched one time and many other times until I decided to continue watching with growing faith and belief seeing everything taking place in the church. And everything I saw was good, real and true, especially exhibited through the testimonies, many of which came after many years of having taken place proving that they could not have been staged managed; healed rotten sores with their scars after many years and one time barren women holding their teenage children…

My family and I decided it was time to visit SCOAN from our Port Harcourt base after a long time of viewing its programmes on the screen.

During the Sunday church service, I received a phone call right inside the church to report to Army Military Secretary in Abuja the next day for briefing!

WOW, so fast, I thought. OK, I was in the church now, had seen everything and heard all, but there was never a time I braced myself up that I would receive a call immediately for whatever reasons from the same institution that had retired me unjustly.

My thought had been, if this man was indeed what they said he was, a Messenger of the Light, and all the other good names he was being referred to, he was not going to be different from the other so-called Prophets I have visited who had built my hopes and expectations to the extent that my daily meal became hopes and expectations without the realization of reality.

Desperate and eager, I was at the Military Headquarters the following day to attend the briefing. After the briefing, we were asked to report to our various corps Head Quarters before the exams. The beginning of my career turn-around and life transformation!

After my visit to SCOAN, I noticed that my body has become very light; I feel happy and no more sadness. I received God’s visitation in my family and my entire life that day at the service, and since then I have started enjoying different realities I thought had eluded me.

Now my garage can boast of new cars, the cry of a baby beautifying my home, once promoted to a Major and now Lt Col.

My spiritual life has improved and I continue to acknowledge God always in my life. After this life transformation and restoration, my slogan has been, and I think everybody should emulate: WHAT GOD CAN NOT DO SHOULD REMAIN UNDONE, that is, there is nothing God cannot do, or what He cannot do does not exist.

Thank you Lord Jesus for your steady love and mercy upon my family and me.