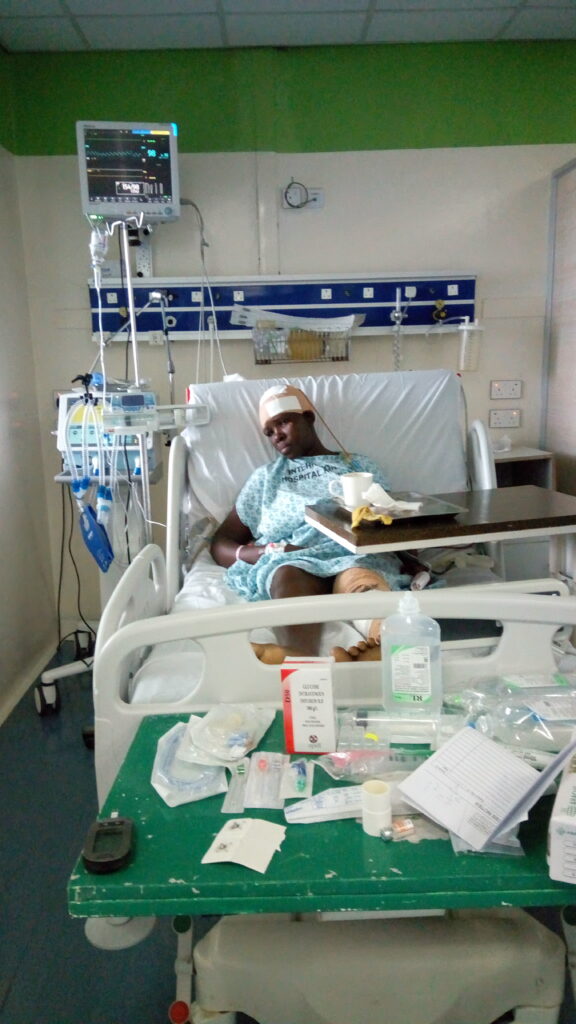 I’m Omara Paul from Uganda. In September, 2018, my pregnant wife, Milly Nakyejjwe, had a normal delivery at the International Hospital, Kampala (IHK). However, after a few weeks, she started feeling this headache which progressively became severe and wasn’t responding to painkillers. We took her to AAR hospital where she was diagnosed with hypertension and was put on medication accordingly. Unfortunately, the headache became rather worse. Consequently, she went back to the hospital and they changed her medication. Things still did not improve. They changed the medication four times but rather than abate, the headache became worse. She would cry all day, pouring water on her head in a bid to get relief.

We eventually changed the hospital from AAR to International Hospital, Kampala where they did a brain scan and detected that she had brain tumor. Arrangement for surgery was made urgently and on 1st February, 2019 she was operated upon. The operation was quite successful but, two days after, she was hit by high blood pressure. As a result, she went into a coma. She was rushed to the intensive care unit where she was put on life support machines amidst other procedures. They again did a brain scan and x-ray and found that blood vessel from the brain had ruptured, causing bleeding in the brain. They also discovered that one of her lungs had collapsed. Her frustrated doctor said there was nothing he could do and that it was now between her and her God. He also said that should she survive, she would not be able to use her arms and legs again. She would also lose the ability to talk.

I used to watch Emmanuel TV but I didn’t know what to do at that time. Glory be to God, one of my colleagues at work directed me to a coordinator of SCOAN who lives in Uganda. I rushed there very fast and was welcomed. After explaining everything to them, I was given The Good Morning Sticker to pray with and, later, a drop of the Living Water from The SCOAN Altar in my bottle to go and minister on her.

Glory be to God, that very day when I entered the intensive care unit, she opened her eyes but they didn’t allow me to touch her or go near her bed. The only thing I could do was to wash my hand and my face with the Living Water.  Then, I stretched my hands towards her while praying in in the name of Jesus. She recovered very fast such that she was taken back to the ward where I was free to minister the Living Water from The SCOAN Altar in her food and bathing water. The speed of her recovery was so fast the doctors and nurses were astonished. They didn’t expect her to regain her senses fully, not to mention having all systems functioning normally again. However, she were discharged on 8th March, 2019, walking, talking and doing everything so well. I have many photos but I will post them separately.

NextPrev May 24, 2019 Category: Morning Water & Sticker Tags: I have many photos but I don't know how to upload them all may be I will post them separately.
No