My Father Recovered From A Critical Condition After Praying With Prophet T.B. Joshua on YouTube 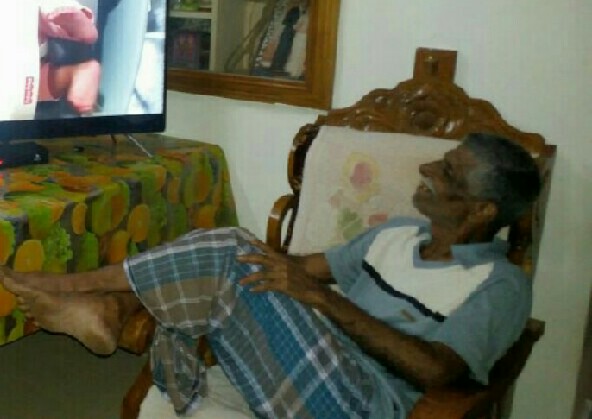 I am an Indian software engineer working in USA. Last June one morning I got a call from my home town in India saying that
my father is very ill with severe vomiting and in the hospital they did a scan and found that there is a block in the
large intestine which caused food to get blocked and cause serious vomiting. They asked for my permission for
the operation. I agreed as there was no other ways to remove that block and he was still suffering with serious vomiting.
I started praying on this.
After few hours around the time of the surgery I called my brother to ask about the situation.
My brother didn’t pick up the phone and after several attempts someone else picked up the phone.
I realised there is some serious problem. Whoever picked up the phone told me that my brother is not in a situation to talk right
now. And he also told that my father’s condition is very bad and he is in ventilator and the doctors do not see much hope and that
the doctors have told to inform all the relatives.
As part of the vomiting and other side effects, there came some serious lungs infection.

I knew the solution is only in Jesus Christ. I soon called a friend of mine who is closer to Jesus and told
him the situation. He right away asked me “Siju, are you living an adjustment life? You need to promise to Jesus that
you will not continue with the adjustment life and follow Jesus fully, then Jesus will take over the situation”.
When he asked that question, it struck my heart and I started crying and tears started to flow.
He also said, “God chooses someone in the family to deliver the family and if they do not stay faithful for that
calling, then it is not good”. And we ended the conversation.
He didn’t sympathise with me on the situation, but the conversation struck my heart and I decided to be faithful to Jesus.
And it gave immense encouragement in my heart and I believed my Jesus will take over the situation.
I thank God for the life of my friend and for giving him as my friend.
I was not ready to lose my father as I loved him very much. Also I felt that he was not really ready to leave earth as he may not
be ready for heaven that time.

Shortly after, I submitted the SCOAN prayer request and at the same time I took the video of our Prophet T B Joshua praying on
YouTube and prayed with him. After a while, I called my brother and he told me that the doctors have kept my father in the
ventilator.
And my father started to show recovery signs and after 3 days in ventilator he was taken to ICU.
After moving to ICU, after few hours my father’s condition weakened again as he couldn’t breathe himself as the lungs
were in very bad condition. And the oxygen count started to go very low and the doctors decided to move him to ventilator
again as there was no other option. And they told that they are not sure whether the brain and heart were affected as the
oxygen count went very low at some point before moving to ventilator.
I again submitted a SCOAN prayer request and started to pray with our prophet T B Joshu on YouTube.
After the prayer I called my brother and he told the doctor told that he wants to do the tracheostomy which he was thinking
to do later and the doctor said that he felt to do that as soon as possible and they did the tracheostomy right away.
I truly believe that God gave the wisdom and instruction to the doctor at the right time to save my father’s life.
After the trachestomy, 2-3 days passed by and my father’s condition started to improve in the ventilator.
During these days, I had serious pressure from my family members to bring me to India. I told them that it is my faith
that keeping my father alive. I will come only when he is in stable condition.

After 3-4 days in ventilator, doctors then moved my father to ICU and his situation started to improve. There was severe
infection in the lungs and he was very weak. But as the days passed by, he started to recover slowly.
After a week he was moved to normal room with lot of medications. Once his situation became stable I booked my flight ticket
to India to be with him in the hospital. Once I reached my hometown, I went to see my father in the hospital and then went to my home
with the Morning Water (which I had kept filling for long time when it was about to finish all the time, since I had one bottle).
I ministered the Morning Water in my home and I could feel some spiritual battle as I started to vomit.
I ministered the Morning Water on all corners of our plot of land.
Then I came back to hospital to be with my father for next two weeks. And at times I felt him battling with some spiritual
afflictions and started to talk without senses and started to get angry, I ministered the Morning Water which cooled him down.
His situation continued to improve and I had to come back after two weeks. Right after I came back, my sister was able to
go to India and nurse him in the hospital and with in 2-3 days of her arrival, he was discharged from hospital.
He was in the hospital around 34 days. And after reaching home he recovered his health and he became healthy like before.
My Jesus restored him to the same healthy condition. He is staying healthy now.
I have attached his current picture.
I could feel God’s protection and guidance and help through out the period of his sickness.
Later doctors testified that indeed it was a big miracle and they hadn’t even seen 1% chance in his situation.

And God used this terrible situation to change me and change my focus towards him.
And Jesus used this to improve my relationship with him.

Advise:
In critical situations run to God and believe in Him. As prophet TB Joshua often says, foolish things becomes useful in God’s hands.
God uses your situations improve you, not impair you. Overcome your situations with faith in the finished works
of our Jesus Christ and allow those situations to improve your relationship with Jesus.